Home / Blog / Meet Rick: One Dad Making a Difference a… 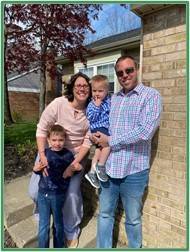 Meet one of our incredible dads of Redwood – Rick Lenihan. Rick and his wife, Amy, discovered Redwood when their first son, Eli, was born with congenital laryngomalacia. Eli’s esophagus was not fully developed, causing it to be loose and fold over, which in turn, made it difficult for Eli to breathe. Eli had to be on oxygen for 18 months and sometimes experienced blue spells of severe difficulty breathing.

Rick and Amy needed caregivers they could truly trust with Eli in case his breathing changed, or he needed assistance. They were grateful when they found Redwood and our team of caring professionals. Since starting at Redwood, Eli has not only grown, but he has also thrived. Their second son, Jonah, was born at 29 weeks’ gestation, which is about 9-11 weeks too early, and was developmentally delayed. Rick and Amy were happy to have Redwood’s therapeutic services and nurses on staff to care for both of their boys.

The Lenihans’ lives took a dramatic turn after Jonah was born – Amy was diagnosed with stage 3 breast cancer and COVID-19 took the world by storm. Rick didn’t shy away from life’s struggles and rose to the occasion to support his wife and two boys. He quickly became the main caregiver of the kids, ensuring pickups and drop offs, doctor appointments, therapies and all needs were tended to. He managed to do this while staying by his wife’s side and supporting her through chemo, radiation, appointments, anxieties, fears and – ultimately – victory over cancer. Amy is in remission today! We are so proud of Rick who is an amazing Redwood dad.

Without the support and flexibility of Redwood, Rick says he is not sure what he would have done during those difficult years. The security of knowing his boys were taken care of so that he could support Amy and still provide for his family was unmatched. He is grateful for Redwood and the love poured into his family daily. Redwood is grateful for dads making a difference, like Rick!