This article originally appeared on WLWT.com 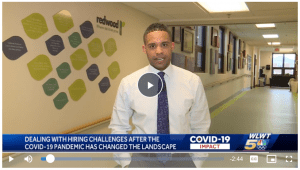 Companies are trying to shore up their workforce as people now have more options and incentives for work after the pandemic changed the landscape in many industries.

For nonprofits, particularly those that specialize in unique care and services like Redwood in Fort Mitchell, they’re seeing fewer and fewer applications come in the door.

John McCoy has tenderly cared and provided for the men and women in this life-skills program for the past 25 years at Redwood. He adds its satisfaction in the work and in making a difference that kept him around this long and continues to bring him back.

“The relationships I’ve built with them and their families, you just don’t get that at other places,” McCoy said.

As the pandemic scuttled their workforce, as well as many other places, staff have been left pretty thin providing the same level of services with fewer applications coming in. As for-profit businesses and restaurants like McDonald’s or Chipotle offer incentives and increased pay and bonuses, nonprofits like Redwood have been left out in the cold in a labor pool that has many options.

Redwood is hiring. But the big caveat for them and other nonprofits on a fixed budget is how to compete with rising wages to get people in the door, it’s a problem that many nonprofits face right now. Wages for many restaurant workers have already increased to 10% and don’t seem to be slowing down.